Sintering is essentially the same process as that used for traditional die pressed Powder Metallurgy parts and can be done in continuous or batch type furnaces, either as separate units or integrated into a complete production line. 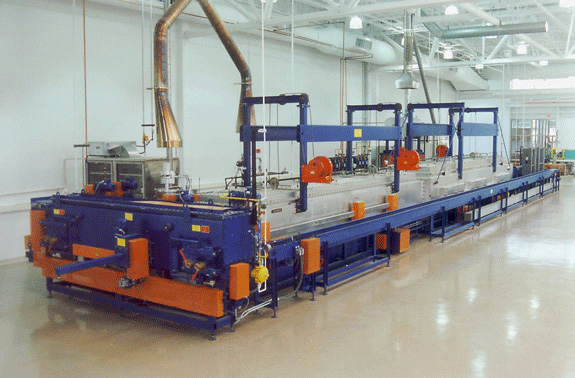 It is carried out in protective atmospheres or in vacuum at a temperature well below the melting point of the metal.

The type of sintering process and the sintering conditions are dependent on the composition and quantities of the materials to be sintered.

Fig. 14 A series of batch vacuum furnaces for Metal Injection Molding. These furnaces can either be used for a combined debind and sinter cycle, or for sintering only. (Courtesy Elnik Systems, USA)

A ‘green’ MIM part (before debinding and sintering) contains approximately 40 to 50% by volume or 6 to 8 mass percent of organic binder. At least two thirds of the binder is removed in the debinding step (typically either catalytic, thermal or solvent debinding) prior to sintering so that the ‘brown’ MIM compacts that enter the sintering furnace have an open pore network.

At this stage, the compacts still contain the so-called ‘backbone’ binder, a polymer that holds the powder particles together and guarantees the stability and shape retention of the parts.

Placement of parts in a furnace

Parts are placed on ceramic trays or in heat resistant boxes while they are in the sintering furnace. Molybdenum is ideally suited for the high sintering temperatures in MIM technology. It has a high melting point, low vapour pressure, low thermal expansion, low heat capacity and heat conductivity and high strength at temperature. Its metallic properties allow bending and welding.

When used as setters for MIM parts, the parts must be separated from the molybdenum by ceramic supports, which can either be in the form of shaped or flat ceramic support plates or by coating molybdenum sheets with a ceramic layer.

The main benefits of molybdenum setters are energy savings, thanks to the low mass and heat capacity, as well as an improved heat shielding, a better temperature uniformity due to the high heat conductivity and less stresses in the parts.